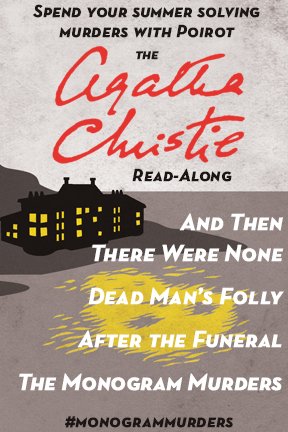 So, who caught the premiere of DEAD MAN’S FOLLY with David Suchet last night? It was great fun and am so glad to see Poirot once again.

As part of the Summer of Christie, and gearing up for Sophie Hannah’s MONOGRAM MURDERS, several of us are blogging about some of Christie’s best work.

What follows are the questions we are all answering. You can view everyone’s links here. And beware of spoilers from here on in.

1. Both Ariadne and Mrs. Folliat hint to Poirot of an evil lurking at Nasse House. Why do you think Poirot cared to listen to the warnings, instead of chalking it up to empty suspicions?

Poirot’s interest in Nasse House and the “evil” that lurked there all started with Mrs. Oliver. The book tells us that the two have been friends for years. Poirot trusts her intuition, even if she has a hard time put her thoughts conscicely.

2. Throughout Poirot’s investigation he was so close to uncovering the truth. What were some of the clues he couldn’t decipher along the way?

Poirot was able to zero things out as clues, but he had trouble making sense of them. This seems to be because he could not decipher a motive. Without knowing why Marlene was killed, and why Lady Stubbs disappeared, he had no way to assemble them in a sensical way.

3. The Chief Constable, Inspector Bland and Ariadne all doubted if Poirot could solve this mystery towards the end. Do you think Poirot himself was starting to give up?

Though he was certainly frustrated by the case, I don’t think he would have ever given up. I can imagine him years later still mulling over the one that got away. It is, in fact, his tenacity that allows him to finally put the disparate pieces together.

4. Do you think Mrs. Folliat should be held legally accountable for her son’s actions? Does her lack of action make her guilty?

Technically, no. Each person is responsible for their own actions, ultimately. I found Mrs. Folliat to be much more sympathetic in the book than in the TV adaptation, actually. Maybe it’s because she was more richly drawn but I felt for her, especially as she played “hostess” during the fete. It was ironic, hurtfully so.

5. In the book, Sir George (a.k.a. James Folliat) was not overly painted as an evil, murderous person; however, in the TV episode his sinister traits were apparent towards the end. Do you think Sir George was inherently capable of performing multiple murders? Or, do you think he was caught in a spiral of deceit that he would stop at nothing to protect?

Maybe it was just me, but I saw Sir George as the one who was a bit daft, not Lady Stubbs. As the housekeeper notes, Lady Stubbs knows precisely what she’s doing. That said, he is still responsible for his actions, but it was his simplistic view on the world that allowed him to justify his actions. Christie writes her characters with more nuance and subtlety than might be possible in an adaptation.

6. Lady Stubbs was described as “subhuman” from the beginning. Did you suspect her of being anything but what she claimed to be?

I suspected *something*. I figured people close to her were hiding something, but I wasn’t sure what. I didn’t expect her to be a different person entirely, though.

7. Supporting character development played a big role in the novel and was only touched upon in the TV version. Do you think the relationship between architect Michael and Mr. and Mrs. Legge was pivotal to the plot or served as background filler?

I loved the architect character in both. I do wish he’d had more of a part in the show. Great comic relief, and great red herring. The lack of development with the Legges also would have provided more color and another red herring.

8. There were some major plot differences between the TV rendering and Christie’s book. What were they? How did you feel about them?

I missed some of the batty dialogue from Mrs. Oliver. The characterization was well-done but I would have liked even a bit more from her. It also would have helped if the detail of the nearby hostel and the wandering backpackers had been established sooner. I missed the very clear xenophobia from the book. Foreigners are not trusted, even hated. In some ways, Sir George was a ‘foreigner’ as well, since he was able to buy his title (rather than inherit it). It was a major plot point for the solution (not to mention a funny moment for Poirot) that is glossed over. It didn’t seem fair to expect the TV viewers to put that together. I also missed the heartfelt conversation that Poirot has at the folly. It is both introspective and gives the reader more character development. I actually sort of liked the double suicide ending. It added drama to the live action version of things. I did not like the arrest and trial of Etienne. That seemed like a lazy way to distract the audience that wasn’t needed. The use of the ferryman as the “fool” was well-done, though he could have been a little less of a caricature.

Thanks to Book Club Girl for hosting and to Kaitlin at William Morrow.