Like most people, I think, I occasionally wonder if I would be able to do wild, daring things. Would I jump out of a plane scraping the edge of the stratosphere, and plummet towards Earth for fun? Would I ever get into a submersible and try to touch the bottom of the deepest point in the ocean? If I tried, could I summit Mount Everest? These are vague hypotheticals, with all the depth of a cocktail party icebreaker. The more I learn about the details of Everest, the less I even want to think about. I’m much more content to sit with a cat on my lap and read about wild, dangerous adventures.

Author Mark Synnott was part of a crew hired to investigate the probable route of George Mallory and Sandy Irvine. They were the leads of a 1924 British expedition to summit the peak. The men left base camp for the top of the world and were last spotted about 800 feet from the summit. They were never seen alive again. Experts would argue whether the pair made it to the top before succumbing to the mountain. 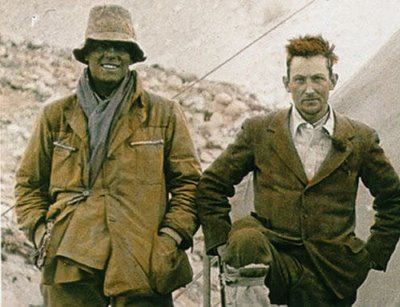 Mallory’s remains were found in 1999, reopening speculation. Synnott was part of a team whose mission was to recover clues from the body, particularly a camera Irvine may have been carrying. If the camera could be found, and if the film was recoverable, and if Mallory and/or Irvine made it to the top, their might be a photograph on that roll to prove it. Admittedly, the possible clue was tantalizing.

Some of the rock specimens Odell collected that day contained fossilized crinoids, a type of sea lily related to starfish and urchins. These fossils offered the first proof that the rocks comprising the upper reaches of Mount Everest are marine limestones that once formed the bed of the Tethys Sea, which separated the Indian continent from mainland Asia, some 225 million years ago. ~Loc. 4602

The team gets the go-ahead to document the trip, including altering the software in some video drones to help locate possible routes and bring back unprecedented footage from the mountain. The crew’s job was not (necessarily) to summit, but to find anything that could point to the answers of what happened to Mallory and Irvine. But by chance, they would be there in spring of 2019, and witness the “day that Everest broke.”

Nirmal Purja, a Nepali-British mountaineer was also there and he snapped this photo on his way down from the summit. It quickly went viral and brought attention to the commercialized aspect of climbing the world’s tallest peak. Increasingly, expedition companies have been packaging a trip up Everest as possible for tourists. These amateurs, with little conditioning and experience, are on the same narrow paths as professional climbers. And because they have spent tens of thousands of dollars to stand at the top of Everest, they have a different mentality than a mountaineer in search of a challenge.

That photo was a confluence of scores of tourism climbers (too many, some would argue) and an incredibly small, ever-closing window to reach the summit. Dozens of climbers chose the same time to make a go of it. But the last bit of the climb are called “The Death Zone” for a reason. Extreme conditions, lack of oxygen, and summit madness all combine to cloud people’s judgement and dexterity. It is with all this in mind that journalist and mountaineer Synnott tries to complete his mission — and survive to write about it.

The strength of The Third Pole is Synnott’s tremendous historical research. He scoured dusty basements and explorer’s clubs, talked to other climbers, analyzed maps and diaries, and consulted with current guides and sherpas. The reader gets to know Mallory, Irvine, and Odell. And the reader gets a detailed look at the mundanity of base camp, the technical precision required in impossible settings, and the truly bizarre range of human obsessions.