REVIEW: THE VISITORS by Sally Beauman 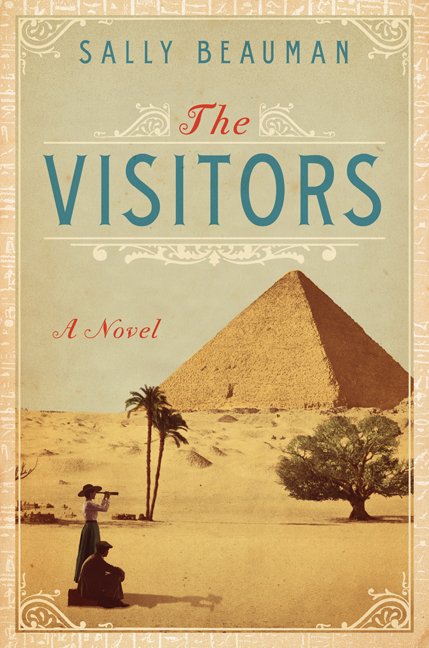 “The Orient—including present-day Turkey, Greece, the Middle East, and North Africa—exerted its allure on the Western artist’s imagination centuries prior to the turn of the nineteenth century.”
Jennifer Meagher, Dept. of European Paintings, The Metropolitan Museum of Art

The cover alone appeals to the unrepentant Orientalist in me. I’m fascinated by the archaeology and exploration of the 1880s to the 1920s. The art, the artefacts, the travelogues and lectures… it’s alluring. It’s Lawrence of Arabia meets Indiana Jones.

Beauman fully exploits this romanticized period. It’s the eve of the greatest modern-day archeological discovery to date — the finding of King Tutankhamen’s tomb. Though this book is a novel, you will have to keep reminding yourself. It is incredibly convincing fiction.

Told from the point of view of eleven-year-old Lucy, the reader sees these characters with a certain refreshing bluntness.  It is a Cairo that is some uneasy mixture of English protectorate, French colonialism and Arab nationalism. While a child can hardly be expected to understand the complications of the politics, her observations make it clear for the reader.

She and her governess, Miss Mack, are traveling to escape the glum Cambridge winter. Lucy only just survived a bout with typhoid — a fight her mother lost. Her father, a Cambridge professor, was so distraught he threw himself into work. So, it is only the practical and unflappable Miss Mack and the emaciated Lucy abroad for the adventure.

Lucy is an astute observer, along with her new friend Frances. Miss Mack plays her cards well and garners invitations into the elite circle of English aristocrats and wealthy who are in the city. Soon, they are party to lavish dinners with Lord Carnarvon and Howard Carter. Lucy is invited to the Valley of the Kings to see Carter’s latest dig site. So far, they have found nothing of any import and the season is quickly drawing to a close. Besides, it’s the fifth year that Carnarvon has funded the unlikely escapades and Carter fears there won’t be another dig.

The cast of characters is like a glittering dinner party, in the middle of the desert. Each has their own agenda and idea of how to achieve it. They play their parts, as society would dictate, on the outside, yet are all the time are scheming their next chess-like move inside. Indeed, the main theme throughout is manipulation — what can be and what can’t. Perceptions, actions, history, the future? Will the Egyptian antiquities council allow Carter and Carnarvon run their own excavation? Will they be able to control their own place in history? Can one set the dominoes in such a way as to push another into action?

As the story progresses, the characters each become more desperate as they realize they’ve played all the games they can think of — and it’s gotten them nowhere. At least not where they’d hoped. At the center is Lucy, who of everyone has done the least to effect her own future. Through her present day interactions as well as her recollections we can see how she is most at peace while everyone else has tired themselves out by so much thrashing.

Beauman does well at balancing the childlike wonderment and elderly hindsight. The impressions remain unsullied by an adult’s cynicism, but the descriptions are much more vivid than an eleven-year old’s memories.

We stayed longer than intended in the underworld of the tombs and visited more of them than perhaps Winlock had first planned. When we finally emerged from the last, the sun was beginning to set in the sky stained the purple of blackberries. The tourists and their guides had long gone: just three boys were waiting for us in the distance, at the donkey shelter where the two branches of the Valley divided. We began to walk back, Winlock striding ahead, Frances and me lagging behind. None of us spoke. The heat of the day was already being sucked back into the sky, and the air was chill. I shivered.  ~Pg. 126

Of course the expedition does find the lost tomb of the Boy King, garnering more fame and attention they could have imagined. In this story, the discovery happens ‘off-screen.’ Lucy and Miss Mack learn of it offsite, though they eventually visit. The real focus of the novel is how the discovery imposes itself on everyone’s life. The real Curse is not that carved above the door, but of the self-destruction carried out on an individual level.

Still, famous images of the dig are referenced. The photographer Harry Burton, whose photographs are iconic now, has a scene that underscores just how remote the site was.

Harry Burton was complaining about the problems of photographing inside the tomb, where there was never enough light, and the heat was near unendurable. He was working with a large-format camera, long exposures and large, heavy glass plates; he had a darkroom in a little-visited tomb, but is was some hundred yards from Tutankhamen’s. The plates had to be wrapped, then transported fast to their developing bath: he had a minute and a half at most to sprint between the two tombs. At first, this had been easy enough — Burton was lean and fit, agile and fast on his feet — but as the numbers of tourists and reporters increased by the day, his task was becoming more difficult. ~ Pg. 347

Beauman manages to satisfy the reader’s expectation of the romance of the desert and vintage archeology (for a reader like me, desperate to be a part of something long gone) while still bringing something fresh to the story. By using a notable moment in history as a backdrop, she can use each character’s weakness as a foil to the immense accomplishment of the ancient civilization.

Many thanks to Harper for the review copy.

** As an interesting side note, Lord Carnarvon’s home is Highclere Castle, which is currently the location for Downton Abbey. Learn more about Highclere Castle and its residents here. **

One thought on “REVIEW: THE VISITORS by Sally Beauman”