My reading list has been a bit of a hodgepodge so far this year. Trying to finish up some galleys as well as get to some books on my nightstand. It also feels like I haven’t had much time to read lately. Work is keeping me busy, as is the dog and the housework. Sometimes when I finally get time to read I’m so exhausted I just doze off! In addition to joining the #ReadChristie2021 book club, here are some of the titles I’ve read recently.

The Forger’s Daughter
By Bradford Morrow

I always enjoy a good yarn by Morrow (see my review of The Diviner’s Tale) and this one has Poe at it’s center, which is even better. This novel didn’t have the most sophisticated plot, but it was fun nonetheless. Morrow’s descriptions are really the star anyway.

from the publisher: After twenty years of living life on the straight and narrow, Will finds himself drawn back to forgery, ensnared in a plot to counterfeit the rarest book in American literature: Edgar Allan Poe’s first, Tamerlane, of which only a dozen copies are known to have survived. Until now. Facing threats to his life and family, coerced by his former nemesis and fellow forger Henry Slader, Will must rely on the artistic skills of his older daughter Nicole to help create a flawless forgery of this stolen Tamerlane, the Holy Grail of American letters.

Spurred by the excellent Netflix series Lupin, I’m rereading the adventures of Arsene Lupin. They are delightful short stories about a slick French thief who is somehow always one step ahead of the law. Clever, imaginative, and deliciously vintage, you can read these for free via Project Gutenberg.

from the publisher: The poor and innocent have nothing to fear from him; often they profit from his spontaneous generosity. The rich and powerful, and the detective who tries to spoil his fun, however, must beware. They are the target of Lupin’s mischief and tomfoolery. A masterful thief turned detective, his plans frequently evolve into elaborate plots, the predecessor to such present day capers as Ocean’s Eleven and The Sting. A turn-of-the-century surprise hit when he first appeared in a short story, Lupin was created in response to the popularity of Sherlock Holmes. These stories—the best of the Lupin series—are outrageous, melodramatic, and literate, and they sparkle with amusing banter.

This is an extremely detailed history of the old Dutch Masters. The writers have documented every home owned, every student taught, every art show mounted, every brush used by these artists. The other half of the book is a detailed history of Russian imperial court, palace intrigues, and Catherine the Great. It’s interesting but dense, so be prepared.

from the publisher: On October 1771, a merchant ship out of Amsterdam, Vrouw Maria, crashed off the stormy Finnish coast, taking her historic cargo to the depths of the Baltic Sea. The vessel was delivering a dozen Dutch masterpiece paintings to Europe’s most voracious collector: Catherine the Great, Empress of Russia. Among the lost treasures was The Nursery, an oak-paneled triptych by Leiden fine painter Gerrit Dou, Rembrandt’s most brilliant student and Holland’s first international superstar artist.

In the Garden of Spite
By Camilla Bruce

I didn’t get very far with this one. I had just read a nonfiction book about Belle Gunness and this fictionalized account of real events just didn’t pull me in. Since I didn’t finish it, I’m not going to give it a full review.

from the publisher: The good people of Indiana may have their suspicions, but if those fools knew what she’d given up, what was taken from her, how she’d suffered, surely they’d understand. Belle Gunness learned a long time ago that a woman has to make her own way in this world. That’s all it is. A bloody means to an end. A glorious enterprise meant to raise her from the bleak, colorless drudgery of her childhood to the life she deserves. 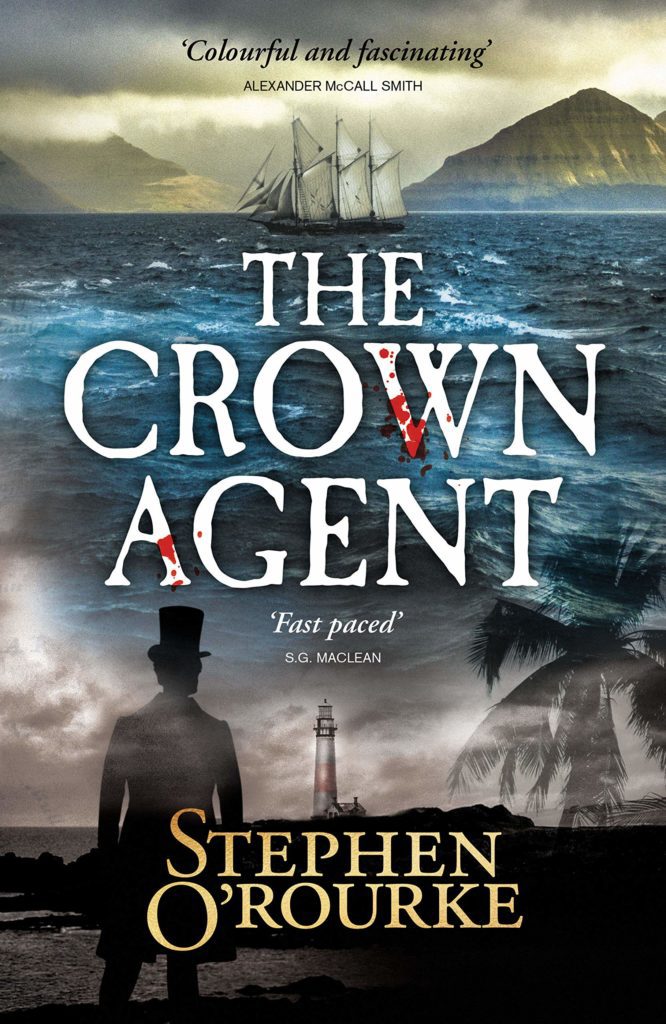 The Crown Agent
By Stephen O’Rourke

I’ve only read about 50 pages so far but this has the makings of an engaging adventure novel. Set in Scotland, just after Burke & Hare, there’s also a mysterious ghost ship, a lighthouse, and a murder — and that’s just the beginning.

from the publisher: Shortlisted for the Bloody Scotland Scottish Crime Debut of the Year. A ship adrift, all hands dead. A lighthouse keeper murdered in the night. The Crown needs man to find the truth. Doctor Mungo Lyon, his reputation tarnished by the Burke & Hare scandal, and forbidden to practice as a surgeon, is the wrong man.mThat’s exactly why the Crown chose him.

What are you reading in February?

2 thoughts on “Books for February”