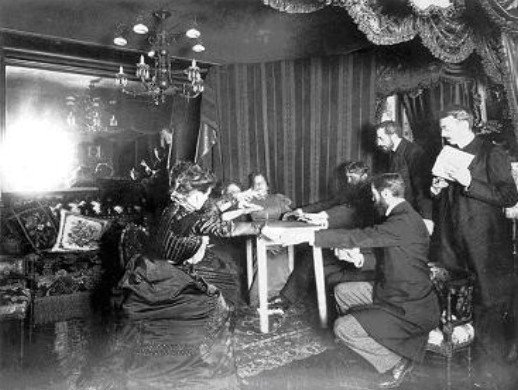 Voices from the Other World

Presently at our touch the teacup stirred,
Then circled lazily about
From A to Z. The first voice heard
(If they are voices, these mute spellers-out)
Was that of an engineer

Originally from Cologne.
Dead in his 22nd year
Of cholera in Cairo, he had KNOWN
NO HAPPINESS. He once met Goethe, though.
Goethe had told him: PERSEVERE.

Our blind hound whined. With that, a horde
Of voices gathered above the Ouija board,
Some childish and, you might say, blurred
By sleep; one little boy
Named Will, reluctant possibly in a ruff

Like a large-lidded page out of El Greco, pulled
Back the arras for that next voice,
Cold and portentous: ALL IS LOST.
FLEE THIS HOUSE. OTTO VON THURN UND TAXIS.
OBEY. YOU HAVE NO CHOICE.

Frightened, we stopped; but tossed
Till sunrise striped the rumpled sheets with gold.
Each night since then, the moon waxes,
Small insects flit round a cold torch
We light, that sends them pattering to the porch . . .

But no real Sign. New voices come,
Dictate addresses, begging us to write;
Some warn of lives misspent, and all of doom
In ways that so exhilarate
We are sleeping sound of late.

Last night the teacup shattered in a rage.
Indeed, we have grown nonchalant
Towards the other world. In the gloom here,
our elbows on the cleared
Table, we talk and smoke, pleased to be stirred

Rather by buzzings in the jasmine, by the drone
Of our own voices and poor blind Rover’s wheeze,
Than by those clamoring overhead,
Obsessed or piteous, for a commitment
We still have wit to postpone

Because, once looked at lit
By the cold reflections of the dead
Risen extinct but irresistible,
Our lives have never seemed more full, more real,
Nor the full moon more quick to chill.