Why CROSSROADS is great — and why you should go 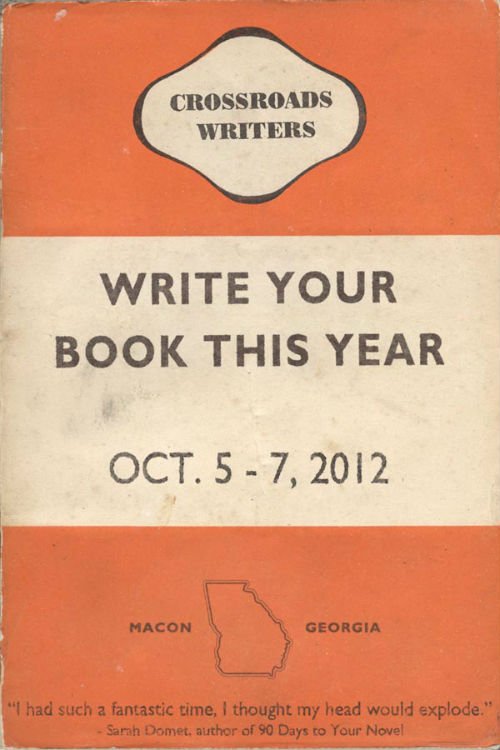 About this time last year I received a postcard in the mail that looked like this.  I’d kinda been stalking Crossroads for a couple of years (sorry, about those creepy collage letters, guys), but I hadn’t made the plunge to actually attend.  I live about 3 hours away, so the drive isn’t bad but it would require a hotel room.  Plus, I had to find money for the conference itself.  And I work in nonprofit arts.

THEN… they announced that Chris Baty would be the keynote speaker.  Yes, THAT Chris Baty.  I’d been receiving form emails from him for years.  I’d failed NaNoWriMo four times! I mean, he probably knew who I was at this point.  I had to be there.

So, while visions of inkwells and quill pens danced in my head, I scrimped a small amount as best I could.

But it wouldn’t be enough… Then I found out that Crossroads offers SCHOLARSHIPS.  I immediately applied (not via collage letter) and set up a GoFundMe account, begging friends for their pocket change.

Luckily, I was awarded a scholarship, which significantly reduced the fee.  That plus a few friends’ donations got me to Macon.

The next hurdle was my fairly intense anxiety of groups of strangers.  I always feel so uncomfortable.  I have a hard time starting small talk and I’m so self-conscious.  What if I say something uncool?  What had I gotten myself in to! A weekend in another city with people I don’t know? What was I thinking? Maybe I could just hide in the hotel room, by myself, and write alone.  That counts, right?

But I forced myself to interact.  And I quickly met such a welcoming group of people.  Angel Collins, coordinator extraordinaire, must have had teleportation skills based on how many places she was at once.  She made sure so many people got where they needed to go, and made us feel important while doing it.

After a couple of sessions, I realized that everyone else here was also a word nerd, too.   Then I ran in to an editor I had worked with, talked Susannah Breslin‘s ear off, and discussed general nerd-dom with Matt Jackson and “enjoyed” karaoke that took me back to high school.

Next morning, after one of the more bizarrely-staffed breakfasts I’ve ever encountered (writing prompt!), I headed to the main conference where I eagerly awaited meeting my twitter buddy CatMScully, who ended up being even COOLER in person — and not a catfish at all. *thumbs up*

The day featured inspiring speeches like the one from Chuck Wendig that included this passage:

We see our stories like we see our children. We just want the best for them. We want them to be great. We want them to win awards and climb to the top of the bestseller mountain and maybe, just maybe they’ll change somebody’s life and in the process help earn us a big fat sack of cash which will allow us to buy a jet-boat or an oil drum full of 18-year-Scotch or hell, maybe a jet-boat that runs on 18-year-Scotch.

There were heart-wrenching spoken word poems from Kevin Coval and of course, a tear-jerking speech from Chris Baty — which basically convinced the entire room that your life is a waste unless you are writing.

I’ve got plenty more stories from my first Crossroads but here is my point:

The act of writing is solitary but I never knew writing could be so friendly.  There is no competitive jealousy at Crossroads.  Everyone I met and talked to wanted to better their own process and was genuinely interested in each other’s projects.  And for the first time ever, I won NaNoWriMo that November.

If you like writing, GO.  Will you get discovered and become the next JK Rowling?  Probably not (although CatMScully did meet an agent who eventually took her on as a client.).  That’s not the point of Crossroads.  It’s a celebration of the written word.  It’s the annual reminder for those of us who need the encouragement to keep writing during those subway commutes and while the dinner is cooking.  It’s Thanksgiving, that once a year reunion, we gather around the table, tell stories, eat* too much, and promise to keep in touch (which we do!).

I can not wait to attend again.  I’m looking forward to seeing old friends and finding new ones.

That and the karaoke.