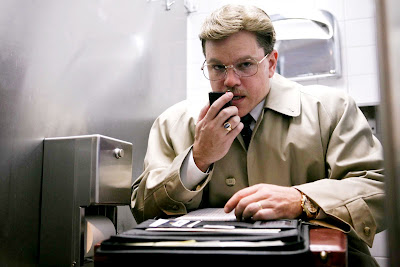 Based on a memoir/novel/autobiography of a whistleblower at a large chemical company, The Informant! is a quirky comedy that avoids the pitfalls of most similarly-tilted films. Matt Damon plays the protagonist, Mark Whitacre, an uncomfortable chemist at Archer-Daniels-Midland (ADM). He is working to solve a problem with one of their components when he stumbles upon evidence of a price-fixing scheme. He reports his suspicions to the FBI and agrees to spy in order to gather actionable proof.

The casting of this movie is impeccable. Damon draws on the awkwardness (and frightening intelligence) of Tom Ripley, the paranoia of Jason Bourne and the deadpan comedy of the Ocean’s franchise to sketch this absurdly funny character. Melanie Lynskey is his sweet, trusting and naive wife with a cutesy voice and perky smile. The combination is so saccharine that if it weren’t tongue-in-cheek it would be sickening. There are several character actors and recognizable-but-not-too-famous faces in the group, but the most brilliant piece of casting is Scott Bakula. He plays the (un)lucky FBI agent who picks up case. His portrayal of an overworked, under-appreciated g-man who hates wearing a suit but loves catching bad guys is spot-on. Additionally, the very funny Joel McHale, as Bakula’s partner, makes a great foil to the disillusioned agent.

In fact helmer Steven Soderberg manages to make a style out of the hideous Federal office buildings that cropped up in the late 60s and early 70s. Indeed, the film, at times, seems set in the 70s rather than the mid-90s. Decorative cinder blocks, translucent window inserts, floor tiles that look like pebbles were rolled into cement and then cut flush, and molded plastic chairs with uneven feet create an atmosphere of alternate reality in these government buildings. For an Illinoian, one of the most incredible details was the inclusion of Abraham Lincoln in every office interior of the movie. As any native knows, Illinois calls itself the Land of Lincoln and touts this honor with great pride.

This movie is fresh, funny, and quirky – without being full of self-referential insider humor that is too busy being proud of itself to tell a good story.