REVIEW: THE VANISHING OF KATHARINA LINDEN by Helen Grant 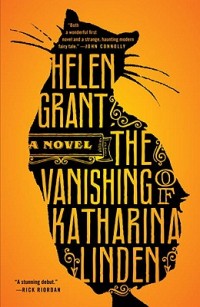 Who says you forget everything you learned in school?  Admittedly, some details are clearer than others.  I graduated from college nearly (gulp) ten years ago already and I still lapse into German when I am tired.  And English is my first language.  For some reason, the language stuck with me — as did the bizarre fables and fairy tales we translated in class.

To this day, one of the most unnerving and unusual is “Die Wassernixe”, or “The Water Sprite.”  In short, a brother and a sister are playing near a well (or fountain, depending on the version) and fall in.  They are captured by the lazy-but-not-that-evil nymph who lives there.  She makes them do her chores, which include carrying water in a bucket with a hole in it (it’s not clear why, since she lives underwater).  One day, when the Wassernixe goes to church (yes! she goes to church!), the kids try to make their escape.  She goes after them so to slow her down the girl throws a hairbrush over her shoulder, which promptly turns into a mountain of bristles.  This only causes a minor delay so the brother then does the same with his comb, with similar results.  Finally, the sister throws her mirror, which turns into a great mountain of glass, too slippery for the Sprite.

Don’t believe me?  Read it here, in several languages.  The Grimms were normally good about making the moral of the story clear, but even now, and as a literature major, I’m still not sure about this one.  Always carry grooming supplies?  Don’t play near fountains?  Wait until your captor goes to church?
Anyway, the point of my lengthy tangent, is that I was so wonderfully reminded of my German lessons, and of Die Wassernixe with Helen Grant‘s debut novel.  The story takes place in Bad Munstereifel (a real place) in the mid-1990s.  Told from the first-person point-of-view of a spunky eleven-year-old, Pia, it centers around the strange disappearance of the little Linden girl.  And the connection?  She was last seen playing by the fountain in the town square.  From then on, water, wells, underground rivers and dampness will become a leitmotif for the book.
As she and her friend Stefan search for clues, avoid stifling adults, and execute daring plans, one is reminded of carefree, adventurous summers — with a less frightening quest, perhaps.  Still, her narrative is refreshing and raw at the same time.  Childhood convictions are shattered and the reader remembers the pain of losing naivete.  It is as much about growing up as it is about solving a mystery.  The weird world of adulthood is much more mysterious.

Pia is far from perfect — she is still learning, after all — but she is extraordinarily heartfelt and endearing.  She is a reminder to speak up when it is important, and go your own way if no one listens.  They’ll catch up.

Thank you to the folks at Bantam / Random House for the review copy.

2 thoughts on “REVIEW: THE VANISHING OF KATHARINA LINDEN by Helen Grant”