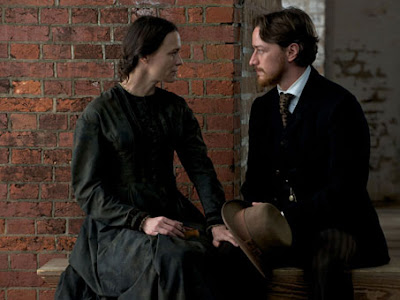 Robert Redford is usually an immaculate storyteller but this film was far too caught up in political history lessons to really find an emotional center.  The story is an engaging one.  Sadly the screenwriter is no better than the writer of the book Manhunt.  The research writer managed to make the 12-day chase for Lincoln’s assassins a wooden and stilted story.  This screenwriter did the same.  (Ironically, their names are James Swanson/Solomon).  The few scenes with believable dialogue were mostly in the courtroom, which I presume were written primarily from trial transcripts.

James McAvoy, who is generally a very strong actor, underplayed the role. His character is supposed to be a naive, reluctant and novice lawyer, assigned an impossible case, but his moral conviction comes on too late, and far too softly.  He would be fiance, played by Alexis Bledel, wears the clothes well, but has no depth whatsoever.  If she were truly concerned with, or even confused by the trial, she only acted petulant and shortsighted.  No intelligent lawyer would have been with her. 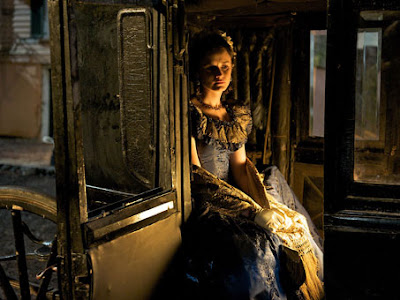 The best performance is delivered by Robin Wright who inhabits the persecuted Mary Surratt, rather than plays her.  Accused of treason for her part in harboring the assassins in the Lincoln – Seward attacks, she is made a sympathetic character.  Throughout the trial, the audience begins to doubt her complicity in the national tragedy, even if her jury does not.  The evidence brought forward certainly brings up some ideas that she may not have known about the plot that was brewing in her own boarding house parlor.

Redford made a misstep in trying to “youthen” the cast with Justin Long and Bledel.  They did not blend into the ensemble or seem realistic for the time period.  Long gave it a try but he is simply too goofy-looking and Bledel doesn’t have the chops to hold her own.  Evan Rachel Wood on the other hand gave the most honest performance of the hodgepodge cast.  Her quiet stubbornness came from within and she was far more convincing as a defiant but restrained Confederate daughter.  Small parts for Tom Wilkinson and Kevin Kline are also not enough carry the weight of others.

The most relevant theme is certainly the treatment of accused enemies of the state.  No one wanted to defend the poor woman.  It was assumed she was guilty and to defend her was career suicide.  Yet there was a case to be made and she deserved to have a proper defense under the American Constitution.  The arguments surrounding the most basic of rights is clearly meant for modern audiences faced with foreign enemies of state.

As a resident of Savannah, it was fascinating to see the homes and streets I know so well look transformed.  And I was excited to watch a scene knowing that I was standing just around the corner, in the shadows as they shouted, “Action.”  But all of that isn’t enough to make the film truly great.  Lighting was uneven and relatively poor.  Costumes were rather stagy.  And the CGI (limited, thankfully) was obvious.  It was a rather uninspired attempt to tell an otherwise fascinating tale from American history.