I am always wary of “fan fiction” of beloved characters, but Mr Holmes is brilliant. McKellen strikes a balance between the classic and arrogant Sherlock we know and love and a realistic, pitiable, complicated man.

It’s 1947 and Holmes has long ago retired to his bees in Devon, with little to entertain his inquisitive mind. When the world’s greatest mind comes to realize he is losing his memory, he becomes desperate for a cure. He hears of a prickly ash plant, native to Japan and brings it home to create tinctures and potions with it.

His existence is a lonely one. He employs a housekeeper (Laura Linney) and she has a son, Roger (Milo Parker). The father died as an RAF pilot in the war. Still, the old man and young boy make an unlikely but irresistible team as they tend to the apiary. Roger brings a youthfulness back to Holmes that allows him, in bits and pieces, to reconstruct the details of his last case. 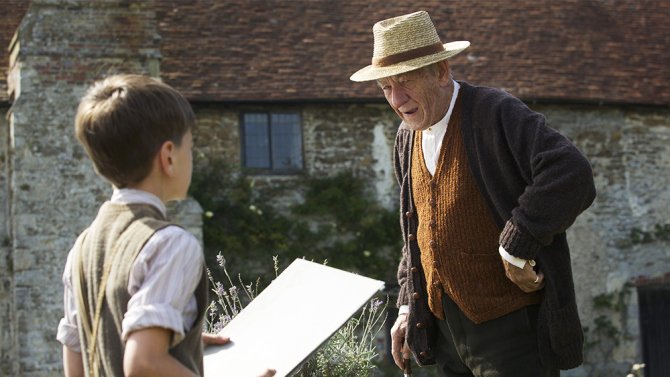 The two of them on-screen is a delight, trading barbs like old friends.

In memory and flashback, we see a younger(ish) Holmes, still on Baker Street but at a loss without his Watson. A young husband comes to ask for help with his wife, who is acting strangely. He engages Holmes to trail Mrs. Kelmot and discover the meaning of her bizarre behavior. Hattie Morahan brings to life a subtle, pained and complex character, though her scenes are relatively few. These are also some of the most interesting in terms of photography. Because we are seeing Holmes’ recollection of this time, the cinematography is a bit more embellished — to great effect.

It is also in these scenes that we see director Bill Condon’s clear nods to Hitchcock. Mr. Kelmot engages a detective to trace his wife, who seems to be obsessing over the dead. She wears a grey suit and makes stops in town including a bookstore and a music teacher’s, but when the proprietor is asked, she is nowhere to be found. These elements are an homage to Vertigo. A more subtle moment is when Holmes spots Mrs. Kelmot looking in a storefront window that reads “Ambrose Chappell – Taxidermy”. One of the red herrings in The Man Who Knew Too Much is Jimmy Stewart paying a visit to one Ambrose Chappell, taxidermist, in search of his kidnapped son. 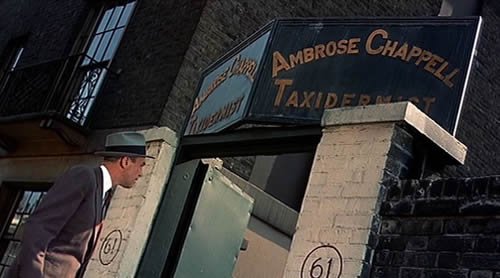 The film deals with life, loss, memory, friendship, regret and forgiveness in a way that is not overly sentimental. We feel the lack of Watson and Mrs Hudson. We see the Sherlock we know peer out from the great blue eyes every once in a while but it is clear things are not the same. Holmes is deeply nuanced and it is sad to watch even a fictional hero become something less than himself. At the same time, there is much to celebrate in the film. The performances are very strong. There is deft humor, gorgeous scenery and a peaceful ending.

Fans of the canon should find this to be a respectful and interesting possible story of the last days of Sherlock Holmes. And there is even a good mystery to unravel along the way.