It is a slow afternoon in Savannah, as it is often. I found a lovely little link to the New York Public Library’s online digital collection. The only thing missing from sifting through these lovely bits of ephemera are the smells of aged inks and shedding paper.
I came across this photo, one I’m sure I must have seen in my study of street photography (self-inflicted) but for some reason, today, it punched me in the stomach. 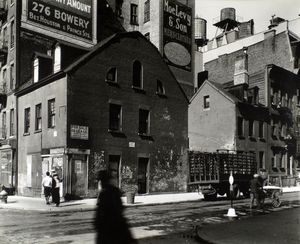 I’m not entirely sure why. The shadowy figure in the foreground is very mysterious. Someone is hurrying along their way, but is he up to no good? What hides beneath his swirling cape?
The building that is now for rent, who used to live there? What happened; why did they leave? it looks tragic, haunted. It is worn, but not with love. It looks beaten and bruised.
The men standing on the corner seem to be speaking in hushed tones. Are they gossiping about the former tenants? Is the man with the pushcart, or the cargo truck waiting to haul the last possessions of the unfortunate tenants?

Berenice Abbott, like her mentor Eugene Atget, set out to record, capture and memorialize the changes taking place in the their cities (Ny and Paris, respectively). Both claimed to be record keepers, rather than artists, yet they are still regarded and some of the most important photographers in the medium’s short history. I think this photo proves that it was more than just memorializing a building or a street corner. She was capture a mood as well.

This site uses Akismet to reduce spam. Learn how your comment data is processed.