It’s still hitting the 90s in Savannah, so no fall leaves or crisp days for me yet. But I can hope. Here are some titles for your September lists.

ABOUT THE WOLF ROAD

ELKA BARELY REMEMBERS a time before she knew Trapper. She was just seven years old, wandering lost and hungry in the wilderness, when the solitary hunter took her in. In the years since then, he’s taught her how to survive in this desolate land where civilization has been destroyed and men are at the mercy of the elements and each other. But the man Elka thought she knew has been harboring a terrible secret. He’s a killer. A monster. And now that Elka knows the truth, she may be his next victim.

I sat up high, oak branch ’tween my knees, and watched the tattooed man stride about in the snow. Pictures all over his face, no skin left no more, just ink and blood. Looking for me, he was. Always looking for me. He left red drops in the white, fallen from his fish knife. Not fish blood though. Man blood. Boy blood. Lad from Tucket lost his scalp to that knife. Scrap of hair and pink hung from the man’s belt. That was dripping too, hot and fresh. He’d left the body in the thicket for the wolves to find.I blew smoky breath into my hands.“You’re a long way from home, Kreagar,” I called down.The trees took my voice and scattered it to pieces. Winter made skeletons of the forest, see, made camouflage tricky ’less you know what you’re doing, and I know exactly what I’m doing. He weren’t going to find no tracks nor footprints nowhere in this forest what weren’t his, I know better’n that. Kreagar looked all around, up high and ’neath brushes, but I’ve always been good at hiding.

More about The Wolf Road 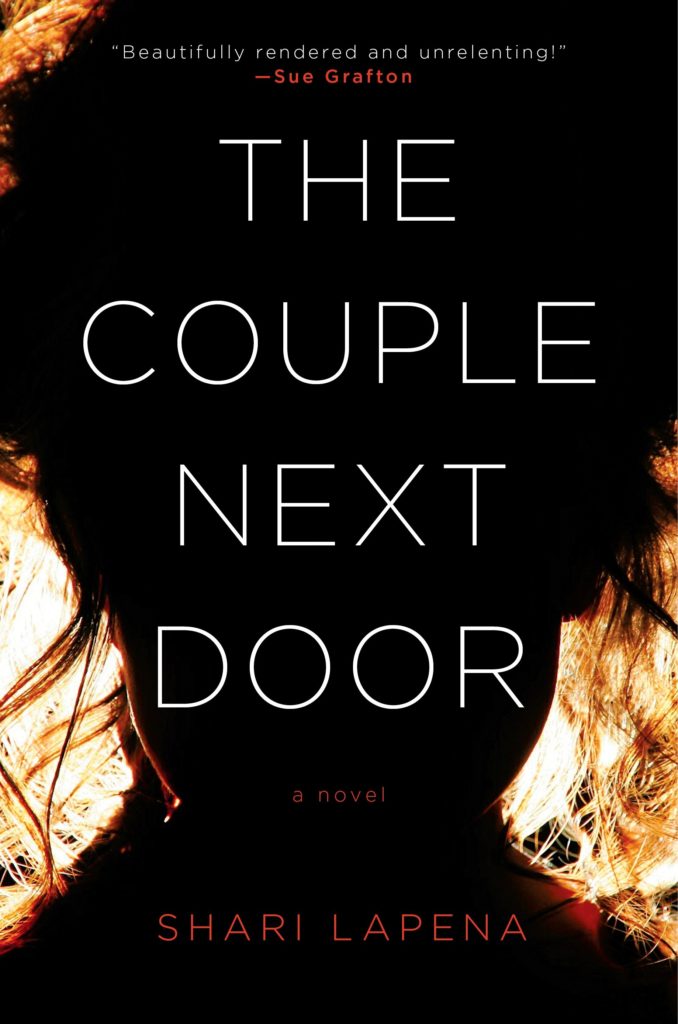 ABOUT THE COUPLE NEXT DOOR A domestic suspense debut about a young couple and their apparently friendly neighbors—a twisty, rollercoaster ride of lies, betrayal, and the secrets between husbands and wives. . . Anne and Marco Conti seem to have it all—a loving relationship, a wonderful home, and their beautiful baby, Cora. But one night when they are at a dinner party next door, a terrible crime is committed. Suspicion immediately focuses on the parents. But the truth is a much more complicated story.Inside the curtained house, an unsettling account of what actually happened unfolds. Detective Rasbach knows that the panicked couple is hiding something. Both Anne and Marco  soon discover that the other is keeping secrets, secrets they’ve kept for years.

Anne can feel the acid churning in her stomach and creeping up her throat; her head is swimming. She’s had too much to drink. Cynthia has been topping her up all night. Anne had meant to keep herself to a limit, but she’d let things slide-she didn’t know how else she was supposed to get through the evening. Now she has no idea how much wine she’s drunk over the course of this interminable dinner party. She’ll have to pump and dump her breast milk in the morning.Anne wilts in the heat of the summer night and watches her hostess with narrowed eyes. Cynthia is flirting openly with Anne’s husband, Marco. Why does Anne put up with it? Why does Cynthia’s husband, Graham, allow it? Anne is angry but powerless; she doesn’t know how to put a stop to it without looking pathetic and ridiculous. They are all a little tanked. So she ignores it, quietly seething, and sips at the chilled wine. Anne wasn’t brought up to create a scene, isn’t one to draw attention to herself.

More about The Couple Next Door

The phenomenal true story of the black female mathematicians at NASA whose calculations helped fuel some of America’s greatest achievements in space. Before John Glenn orbited the earth, or Neil Armstrong walked on the moon, a group of dedicated female mathematicians known as “human computers” used pencils, slide rules and adding machines to calculate the numbers that would launch rockets, and astronauts, into space.

Among these problem-solvers were a group of exceptionally talented African American women, some of the brightest minds of their generation. Originally relegated to teaching math in the South’s segregated public schools, they were called into service during the labor shortages of World War II, when America’s aeronautics industry was in dire need of anyone who had the right stuff.

Pretty much anything anyone needs to know about writing can be learned from Jane Austen. While creative writing manuals tend to use examples from twentieth- and twenty-first-century writers, The Jane Austen Writers’ Club is the first to look at the methods and devices used by the world’s most beloved novelist. Austen was a creator of immortal characters and a pioneer in her use of language and point of view; her advice continues to be relevant two centuries after her death.

Here Rebecca Smith examines the major aspects of writing fiction–plotting, characterization, openings and endings, dialogue, settings, and writing methods–sharing the advice Austen gave in letters to her aspiring novelist nieces and nephew, and providing many and varied exercises for writers to try, using examples from Austen’s work.

If many hands make light work, how can too many cooks spoil the broth? If you’ll find the best advice on your pillow, are proverbs even useful? How come these nuggets of wisdom and truth are so similar the world over? Alice O’Neill takes a tour of more than 1500 proverbs from cultures around the world, underscoring that a proverb’s invaluable purpose is to make people pause for a moment and reflect, often revealing a much deeper truth. Gathered widely from ancient (sacred) texts, aboriginal beliefs, political tracts, literary classics, and contemporary advertisements, and illustrated with beautiful engravings and drawings, this collection makes clear the power that resides in a few words.

How do you tell what’s right from what’s wrong? Can you always? What’s the difference between deduction, induction, and abduction? What are the best techniques for making an argument logically sound? In this fascinating little book, the smallest on its subject ever produced, philosopher Earl Fontainelle explores the ancient are of discursive Logic and demonstrates some of the techniques that have long been used to triumph over the debates and deceptions that assail us every day. Filled with helpful examples of good and bad reasoning, Logic is an invaluable introduction to a defining human characteristic.

What are you looking forward to reading next?

2 thoughts on “Books for September”