ACCENT: IF WE WERE VILLAINS 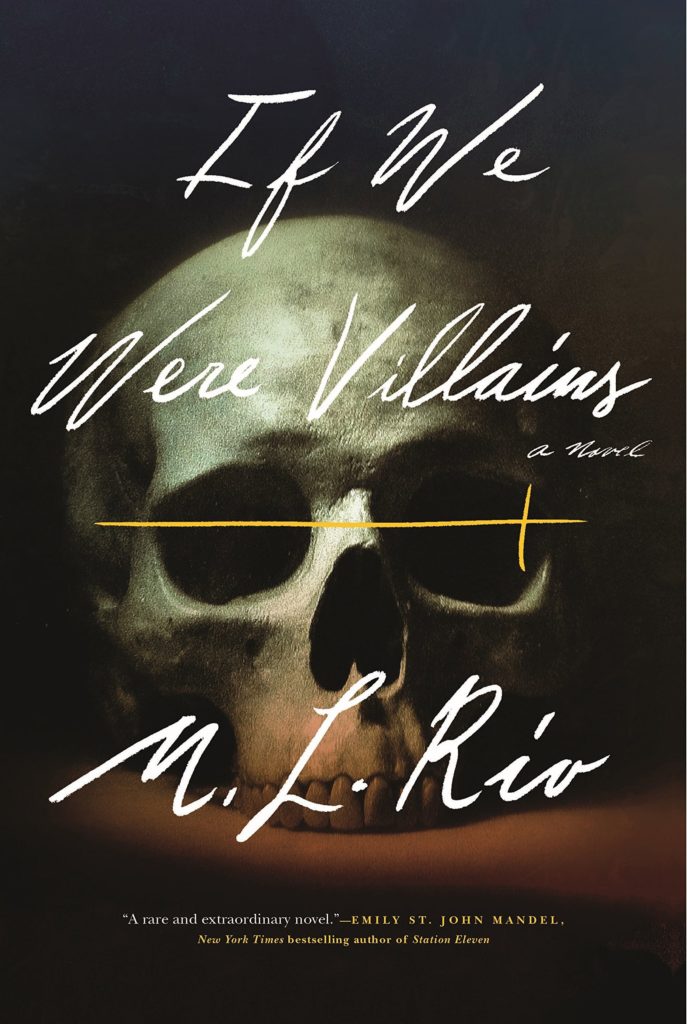 Anyone who has been part of a cast knows how tight-knit a group it can become. Late nights, stressful rehearsals, inside jokes. For some, the emotional outpouring becomes a drug addiction that constantly needs to be fed.

In M.L. Rio’s debut novel, the characters are a close klatch of seniors about the graduate from an intense arts conservatory. They each have idiosyncrasies, their strengths, on stage and off. They can finish one another’s sentences and have entire conversations in random lines from obscure Shakespearean passages. Though different in details, Rio captures the setting and energy of a story like Dead Poets’ Society.

The intense bond they have formed over the years stretches taut in the final months of school. When one of their players is found bludgeoned and dying, the string snaps. Doubt and suspicion run rampant. They can no longer focus on their acting or school work. Instead, each in their own way turns their dramatic obsession into real life. They analyze one another as archetypes. Which they are.

The story is told in Oliver’s voice. Of the group, he is probably the least intriguing. He’s not flashy or loud or scene-stealing, but he is the reliable workhorse with a penchant for poetical turn of phrase:

SThe time: September 1997, my fourth and final year at Dellecher Classical Conservatory. The place: Broadwater, Illinois, a small town of almost no consequence. It had been a warm autumn so far.

Enter the players. There were seven of us then, seven bright young things with wide precious futures ahead of us, though we saw no farther than the books in front of our faces. We were always surrounded by books and words and poetry, all the fierce passions of the world bound in leather and vellum. (I blame this in part for what happened.) The Castle library was an airy octagonal room, walled with bookshelves, crowded with sumptuous old furniture, and kept drowsily warm by a monumental fireplace that burned almost constantly, regardless of the temperature outside. The clock on the mantel struck twelve, and we stirred, one by one, like seven statues coming to life. ~Pg. 1

The book is laid out like a play, with act and scene demarcations (though readers should note it is a novel and in prose). Rio’s expertise on the subject of Shakespeare and its modern study are very evident. The characters’ habit of speaking in Shakespearean shorthand can be a little distracting but Rio doesn’t allow the plot to get hung up on it. The reader does not need to be fluent in the Bard’s plays to enjoy, or understand, the book.

The novel ultimately hinges around responsibility. Who was responsible for the death? The days leading up to it? Who will be blamed shifted when the death becomes public knowledge? Most importantly, how will each character internalize it and what will they take on as their own fault?

This is the excellent foppery of the world, that,
when we are sick in fortune,– often the surfeit
of our own behavior, — we make guilty of our
disasters the sun, the moon, and the stars:
as if we were villains by necessity; fools by
heavenly compulsion; knaves, thieves, and
treachers, by spherical predominance; drunkards,
liars, and adulterers, by an enforced obedience of
planetary influence.

My thanks to Flatiron Books for the review copy.

2 thoughts on “ACCENT: IF WE WERE VILLAINS”